On July 9th and 10th, UNAFEI and the Japan Rehabilitation Aid Association co-hosted the Asia Volunteer Probation Officers Meeting at Hotel Arcadia Ichigaya (Chiyoda Ward, Tokyo). This was held as a commemorative event for the 100th anniversary of the Japan Rehabilitation Aid Association, and was the very first international meeting for volunteer probation officers (Hereinafter VPOs). 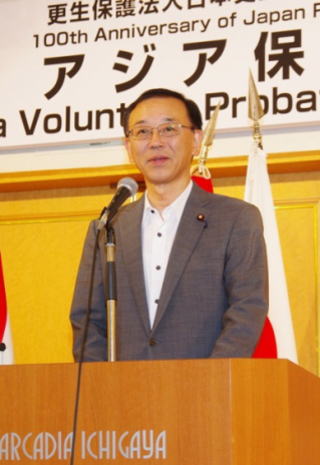 Opening remarks by the HonourableSadakazu Tanigaki, Minister of Justice of Japan

At the meeting, the Honourable Sadakazu Tanigaki, Minister of Justice of Japan, Mr. Hiroshi Okuda, President of the Japan Rehabilitation Aid Association and Mr. Yuhiko Saito, Director General of the Rehabilitation Bureau of the Japanese Ministry of Justice, delivered opening addresses to the meeting, and Ms. Tomoko Akane, Director of UNAFEI, delivered her Keynote Speech. All the participating countries, including the observing countries presented their respective countries’ systems and practices of community corrections, stressing their initiatives to rehabilitate offenders and reintegrate them into the community through the assistance and support of VPOs, followed by very active and eager discussions. The meeting was chaired by Mr. Shoji Imafuku, Counsellor of the Rehabilitation Bureau of the Ministry of Justice of Japan.

Through two days’presentations and discussions, it was recognized that VPOs play key roles in their communities in the prevention of crime and rehabilitation of offenders in all the participating countries; Moreover, VPOs are dedicated to public service in their communities. On the other hand, it was also recognized that the participating countries face challenges in their VPO systems such as: recruitment of appropriate VPOs; training and development of VPOs; securing VPOs’ safety when carrying out their duties; reducing VPOs’ psychological and financial burdens; enhancing public recognition, and so on. 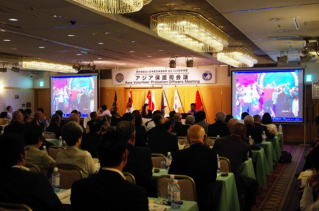 Upon the conclusion of the plenary discussion, the “Tokyo Declaration of the Asia Volunteer Officers Meeting” was adopted, which resolves to share each country’s experiences and to further create an international network among Asian VPOs. At the closing of this historic event, the Declaration was read aloud, in turn, by representatives of the country delegations led by the President of the Japan VPO Association, Mr. Daizo Nozawa (former Ministry of Justice).

Reading of the Declaration by the Representatives of the VPOs of each country (From left to right: Korea, Philippines, Japan, Thailand, Singapore)